Alert: The phpfreaks forum members data appears to have been stolen. 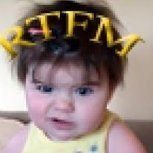