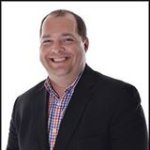 $data $array - the print result mashes all the numbers together